Ever doubted that your contribution could make a difference? In this short blogpost, Katharine Burn explains how the HA survey was crucial to defeating the mad National Curriculum plan of 2013 – just ask an older colleague if you were not teaching then!

The HA Survey window must end in the middle of October and this is a plea, if you have not yet had chance to complete it, please do. The weight of our opinions together does have impact. Thank you!

Every year the Historical Association asks history teachers to respond to a survey about history in their schools. The survey is open to all secondary teachers in the UK – and we’re asking for responses from as many different schools as possible. Many thanks to those of you (well over 200) who have already filled in this year’s survey.

If you’ve not yet responded and would like to do so, we have extended the closing date to 19th October – here is the link.

If you’re wondering why you should bother – and I know how precious your time is – it might help to know more about how useful the survey has been in the past and what the HA does with the results.

Its biggest impact, without any doubt, was in 2013 when over 700 history teachers responded – using the survey to make clear their views on the first draft of the revised National Curriculum published by the Department of Education, under Michael Gove.  That original draft set out plans for primary schools to teach a chronological survey of British history extending right up to 1707 (the Union of the Parliaments). Key Stage 3 was expected to begin in the mid-18th century, with ‘Wolfe and the conquest of Canada’ as part of the story of ‘Britain and her Empire’. Teachers were appalled both by the narrow, Anglo-centric nature of the proposed curriculum and by the way in which a huge list of specified compulsory content would have made it impossible to focus on questions of cause or consequence or the diversity of people’s experience in the past.

The outrage of the history community was clearly represented by the summary charts that we pulled together, showing how clearly teachers rejected the suggestion that primary schools could deal with the whole span of British history up to 1707, and how inappropriate the defined content was as a means of equipping young people with the knowledge and understanding they needed to live in 21st century Britain. 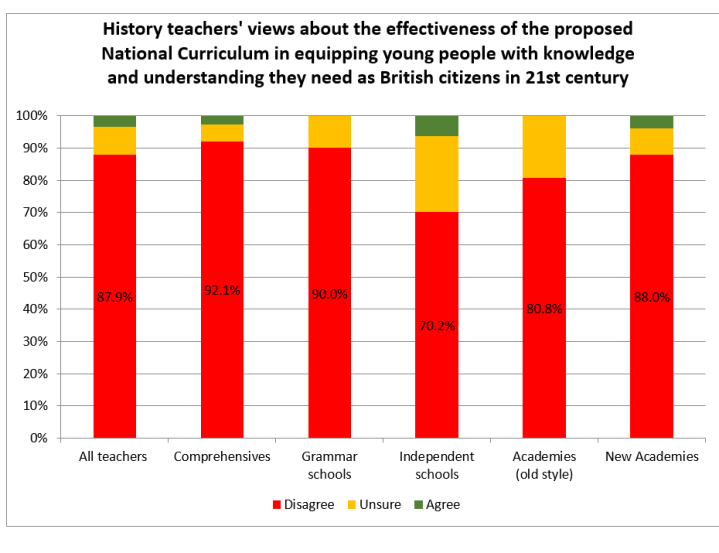 The HA was able to take copies of the survey report into its meetings with the DFE, providing powerful support for its argument that the sheer amount of content would make it impossible for the curriculum to achieve its own stated aims. 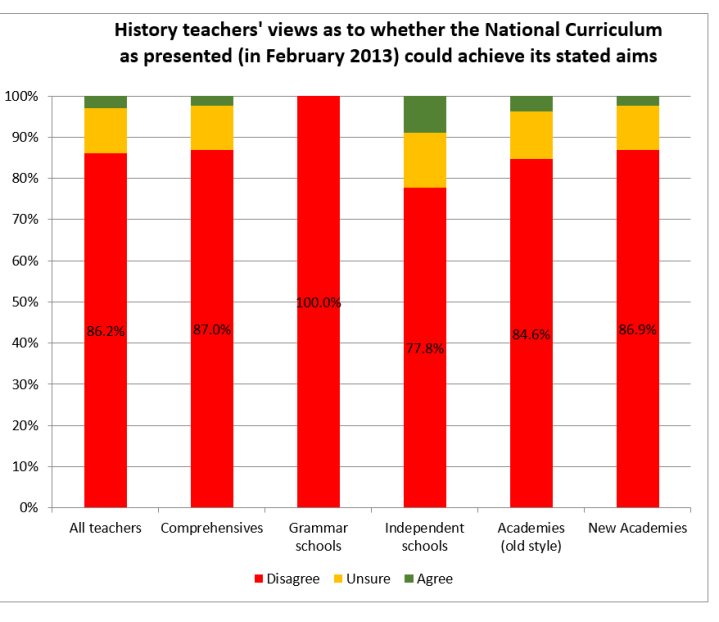 The final version of the curriculum, published later that year, not only restored responsibility for teaching medieval and early modern British history to secondary schools, but also presented detailed content for inclusion as suggestions, rather than compulsory requirements.

While nothing else has been quite so dramatic – in terms of the strength of teachers’ views or immediate policy changes – the survey provides the basis for an annual meeting with the DFE and regular conversations with Ofsted, as well as informing the HA’s response to formal consultations. Using the survey, the HA was able to demonstrate that although the introduction of the EBacc measure led to a significant increase in the proportion of young people taking history at GCSE – from around 30% to 40% – it also led to an increased pressure in many schools to prevent certain students from taking history (if they seemed unlikely to secure a grade C at GCSE). The introduction of Progress 8 has begun to change this in recent years. 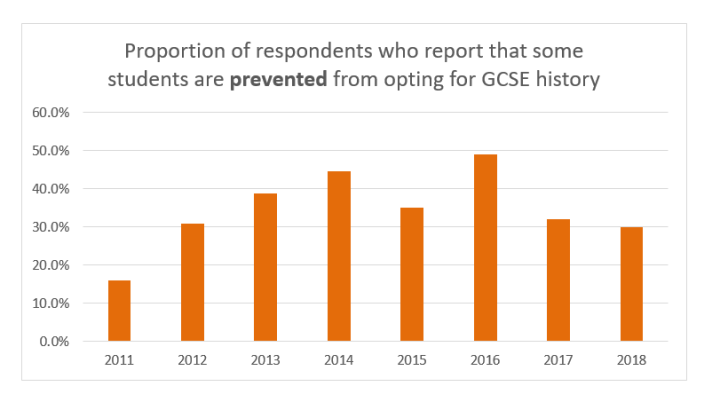 But that doesn’t make the new GCSEs any more accessible. Collecting evidence about the challenges teachers face in supporting lower attainers and those with weak literacy allows the HA to go on lobbying – making the DFE, Ofqual and publishers aware of teachers’ and students’ needs.

Having clear evidence about history teachers’ CPD needs – including how little history-specific CPD they get – has also helped the HA to create the programmes for its regional history forums, day events and webinars and also guides our conference planning. It has also allowed the HA to attract funding for its Teacher Fellowship programmes – encouraging historians (with grants to spend on ensuring the impact of their research or budgets to mark major anniversaries) to invest in courses for teachers that combine a weekend site-specific, residential with an online programme, and result in lots of new resources for other teachers to use. Here are the resources for teaching the later Middle Ages produced by the Agincourt 600 Teacher Fellows.

The more teachers who respond to the survey, the more effectively we can map what’s happening in schools and classrooms across the country and the more powerfully we can represent teachers’ views in meetings with the DFE, Ofsted and the exam boards. We can also engage with others, such as the Royal Historical Association, in highlighting shared concerns, including the negative impact of narrow school and university curriculums on the proportion of BME students choosing to continue with history to examination or degree level. That’s why this year’s survey has some specific questions asking about the diversity of your curriculum, as well as exploring new issues like the impact in your school of the revised Ofsted inspection framework and on-going worries about the effects of budget cuts. Please let us know what matters most to you!