It was an idea that developed from a conversation about a shared interest in books. A Twitter conversation, lamenting the lack of time to read historical scholarship, blossomed into a question. Why isn’t there a book group for history teachers? A place for teachers to read more scholarship and discuss its implications for our teaching. Having met up at @TMHIstoryIcons in Sheffield last year, we came up with a simple idea to start an online book group for history teachers. It was important to us that the first book be accessible, linked in some way to the history curriculum and something as teachers, we wanted to read ourselves. The Whatsapp group was set up in April 2018 mainly for us, as we live at opposite ends of the country, and a few history teachers came onboard keen to read together and share their thoughts. Within a few days we had received over 100 requests to join the Whatsapp group, and the initial conversation about setting up a teachers’ book club had gained a momentum of its own. We always felt it was important from the start to invite everyone in and then decide on a book and were keen to set up a voting system to allow the group to have their say on the first book. The feed from the first few days included photos of books that teachers intended to read, recommendations that included Silk Roads by Peter Frankopan, Black Tudors by Miranda Kaufmann and Travellers in the Third Reich by Julia Boyd – which turned out to be our first book.

Travellers, as its shorthand became, was a great book to start with for three reasons. It was a familiar subject but told from a refreshing angle. It was a book that lots of people owned but had not yet started. Lastly it was told from multiple perspectives so looked like it would prove good value for history teachers that wanted to get lesson ideas through participating in the book group. The introduction proves the last point to be true. It tells the story of a British couple approached by a Jewish woman who begs them to take her child to safety. Boyd asks the reader what they would have done. We knew that this question would be one of the first book group discussions.

The biggest issue we had in the beginning was how much of the book would we discuss each time. If it was pitched wrong, it would become an insurmountable task that teachers wouldn’t participate in, or it would be so frequent that it would lead to burnout and disinterest. We decided on the first four chapters and went from there. In our first discussion it was clear people were engaged in the book from the comments that flew around between participants on Twitter. We could barely keep up using just the Twitter app so a switch to Tweetdeck was necessary to really manage, encourage and guide the discussion. The discussion repeated the same format of a section of chapters for the next chat until the book was finished. Seeing teachers from across the country engage with each other on the same subject is exactly what a book group should be. The discussion was lively and the WhatsApp group was growing,but the biggest change came with our next selection.

The vote is a big part of the book group. it means that whatever is selected there is a group of teachers that championed it and want it discussed. The die-hard WhatsApp members nominate the books for discussion. This often involves emotional pleas for a certain piece of scholarship that they have read and believe deserves a wider audience. The shortlist is then chosen by us and put to twitter for a vote. This has proven to be the catalyst for historians’ involvement with the group. The vote has become an event in itself. As members championed their book choice, with comments and hashtags in abundance, historians became aware that there was a group of history teachers that wanted to engage with their work. It has led to some votes being taken over by the historians themselves. In one vote, Peter Frankopan, Lindsey Fitzharris, Miranda Kaufmann and Hallie Rubenhold were all involved. That vote was won by Miranda Kaufmann and she set a standard for other historians to follow.

Miranda was enthusiastic about participating in the discussion from the moment she became aware of it. It soon became clear that she had already done a lot to work with teachers and knew how to get the key ideas of Black Tudors into the history classroom. She was only able to participate in the final discussion, but it was certainly worth it. She spent the hour answering every question and even went through the comments after the discussion had finished to ensure she had picked up on every query about the richly diverse Tudor England she had uncovered. This was followed up by Lindsay Fitzharris and The Butchering Art. Her enthusiasm for the work of Lister shines through her work and it also shone through in the way she discussed the book with us. Hallie Rubenhold’s “The Five” had been around the vote for a while, with many members saying how significant her work was. It was the book group summer read and proved very popular, with shots of the book being read in gardens, on planes and on the beach. The discussion showed how personally affecting the book was and Hallie’s passion for giving a voice to these women enthralled those that participated on the chat.  Being able to ask the author about what made them write the book, what else there is to explore and what stories touched them most, creates a stronger connection amongst the readers with their work, leaving a lasting imprint on teachers that inspires them to change their schemes of work based on what they have learned.

The curriculum, scholarship and fitting it all in

We’ve also been aware over the past five books that teachers and educators were starting to use their in depth knowledge from the books to redesign their lesson planning. Tim Jenner’s article in TH 174 Making Reading Routine: helping Key Stage 3 pupils to become regular readers of historical scholarship encouraged teachers to embed reading into the planning process. At the SHP Conference in July 2019, Tim went one step further by presenting his Key Stage 3 Scheme of Work distilled down into a series of history books. In many respects, the reexamination of Key Stage 3 through greater emphasis on scholarship prepares students for the rigours of GCSE. Making textbook reading the start rather than the only way of accessing history, and introducing historians into the classroom to different interpretations of the same period, event or individual, was a revelation to our students. Almost by accident, we were designing a history teachers’ book group which in itself is nothing novel, with Year 7 schema in mind. The ‘how can this book work in the classroom’ began by addressing the historical scholarship within our own KS3 curriculum and, as Tim has developed further, making sure scholarship is sequenced, enriching and challenging for all our budding historians. The live chat in our first two discussion forums held on Sunday evenings backed up much of Tim’s argument, although at this stage it had not been published.

Taking it into the classroom

The book group chat has inspired teachers to fold more scholarship into their schemes of work. So many comments on the WhatsApp group start with “I have used (insert historian) in my lesson today”. The caveat is that just reading more scholarship does not gurantee that inspiration will strike, but for there have been some fantastic examples. Teachers have used the personalised experience of the inter war period in “Travellers in the Third Reich” to further explain the impact of Hyper Inflation or the “seething brew” that led to the rise of the Nazis. A scheme of work on Black Tudors had already been created and book club members have taught it with supreme confidence, having explored the key individuals and themes with the author herself. The fabulous introduction of life and death in Victorian England from the start of “The Butchering Art” has been used as guided reading for the start of an enquiry into living conditions. A whole enquiry about life in Victorian England was created suing the story of “The Five”, only mentioning their fate in the final lesson. A walking tour of London sites of these women was even created. The interpretation of abolition offered in “Black and British” has been used to frame an enquiry on the end of slavery. This is just the tip of the iceberg, there many other examples of how deep the inspiration provided by the history teacher book group runs through the lessons and enquiries of those that have engaged with it.

The next @historybookgrp choice is “East West Street” by Phillipe Sands. If you want to join in, contact us and get involved. 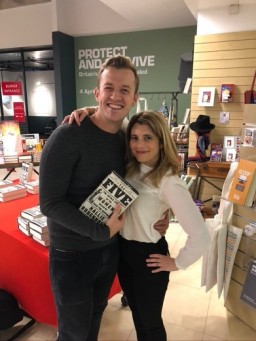 Coming soon in the new year from @histassoc and #OBHD:

Wishing everyone a restful and enjoyable holiday!