Many thanks to Dr Danielle Donaldson, Head of Department, Concord College, Shrewsbury for this blogpost sharing her department’s work to extend the range of sources used in class and to teach the history of Sikh women.

We have been working on decolonising and integrating more representative history in our schemes of work at Concord College. Our enquiries are aimed to provide our international students with diverse perspectives of empires in the medieval and early modern period. Our autumn scheme of work includes a depth study of early modern India, from the Mughal Empire to the East India Company (EIC) and the creation of British India. This left our students with some gaps but also huge opportunities:

1. It is a very top-down approach to colonial history, focused on male rulers or male figures in the EIC, battles and warriors, with little reference to women or other types of resistance. I wanted to allow students to use this hinterland knowledge of India (Hindustan) in the early modern period to get them to think about diverse experiences of resistance and colonial take-overs.

2. Students knew a lot about the political process and economic process of integration, exploitation, and annexation – but rulers came and went. They were not inherently interested in the personal stories of the people who were impacted. It was a tale of empires and corporations – not a human story. However, they had a huge amount of political context knowledge in which to investigate the voices of the people involved through source analysis.

Introducing to Sikh female History in our curriculum

Our curriculum is designed to be a “narrative” developed over time, inspired by Christine Counsell and several HA articles on curriculum design in TH 183. We wanted to introduce early modern Sikh history as part of our depth study of India to provide a foundation for understanding later Sikh contributions to British history: Sophia Singh as part of the suffragettes (see Martyn Bajowski and Hugh Richards’ blog) and Sikh soldiers as part of World War 1.

Sikh history is easily accessible through academic works such as “Royals and Rebels: The Rise and Fall of the Sikh Empire” by Priya Atwal. This provided an important basis for us looking at finding a figure that could excite interest and who students could get invested in. The character of Jind Kaur, the last Queen of the Sikhs and Duleep Singh’s mother quickly emerged as a hugely exciting figure of resistance, but who also looked at the models of previous female rulers to resist the British take-over of the Sikh Empire. 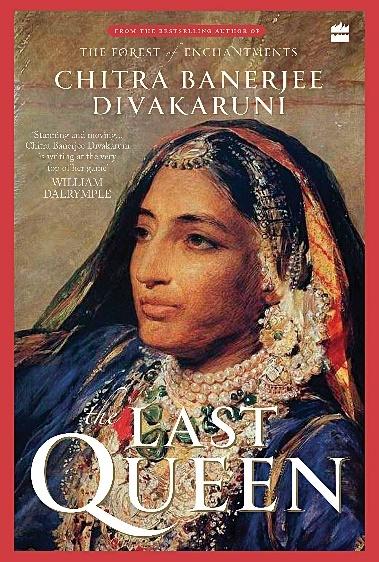 Using narrative to get students invested in Jind Kaur

Having been inspired by Christine Counsell’s HA virtual speech on narratives and Martyn Bajowki and Hugh Richards’ work on the story of Sophia Singh, we decided to write a narrative of Jind Kaur’s life of resistance.  It was based on and adapted from The Last Queen by Chitra Banerjee Divakaruni.

An exciting figure, Jind Kaur was the daughter of a dog trainer, who became a minor Queen of the Sikhs with a young son by the time of the death of Emperor Ranjit Singh. However, after the murder and untimely deaths of the seven older sons (including grandsons and regent queens), she became Queen of the Sikhs as regent for Duleep Singh. With the defeat of the Sikh army at the hands of the EIC in 1846 and her resistance to the British officer Lawrence, she was forcibly separated from her 9 year-old son and exiled from the palace in 1847.  Accused of inciting the 1848 Sikh Rebellion, she was finally exiled to British India and her son was forced to sign over the Sikh Empire to the British. Undeterred, she escaped from her imprisonment in the fortress of Chunar and walked over the Nepal mountains until she arrived in Katmandu. We left the story on this cliff-hanger….what would she do next?

The story is attached below: 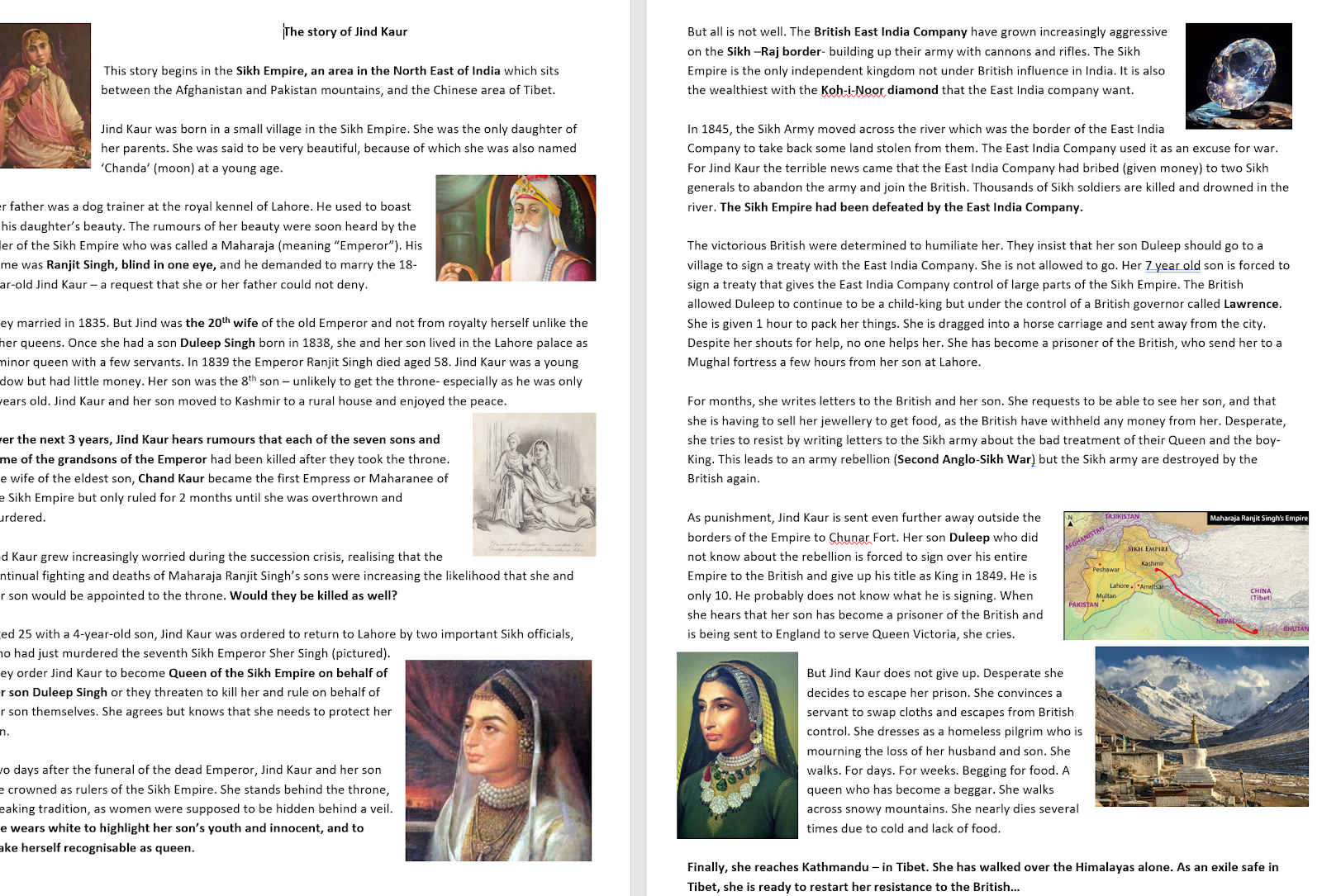 After two lessons getting students to know and get invested in Jind Kaur’s story and her treatment under the British, we wanted them to read her letters to the British officer Lawrence who had taken over guardianship of her son. 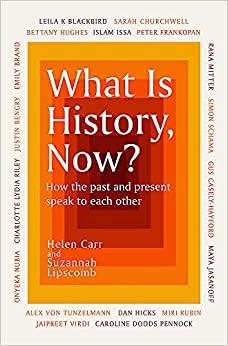 Inspired by Suzannah Lipscomb “How to recover the lost lives of women” in What is History Now?, we wanted our students to interrogate Jind Kaur’s letters to show how she attempted to resist British control – although she was imprisoned, weakened and under their full power. We did not want students to risk reading these letters at face value especially parts that were very flattering of the British. This would lead to fundamental misconceptions about power balances and fall into the trap of adopting British colonial narratives that the Sikh Empire was “willingly” given to them.

We decided to bring to the forefront the tools used by historians and archivists to analyse post-colonial sources. Adopting resistance reading techniques inspired by Teaching Tolerance and sociological terms “Weapons of the Weak”, we showed how people who were under the control of powerful institutions or people could resist through disguised and low-level techniques. 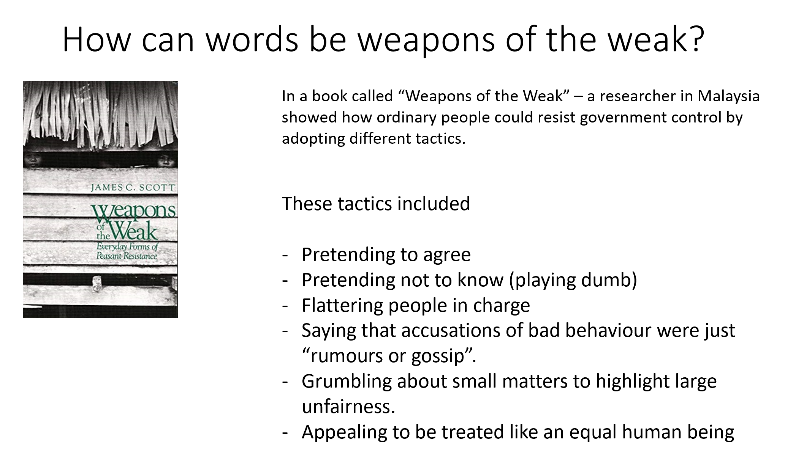 We then showed them that in the classroom or school context, they often adopted similar weapons of the weak to resist the dominant power. This led to very illuminating conversations and confessions! 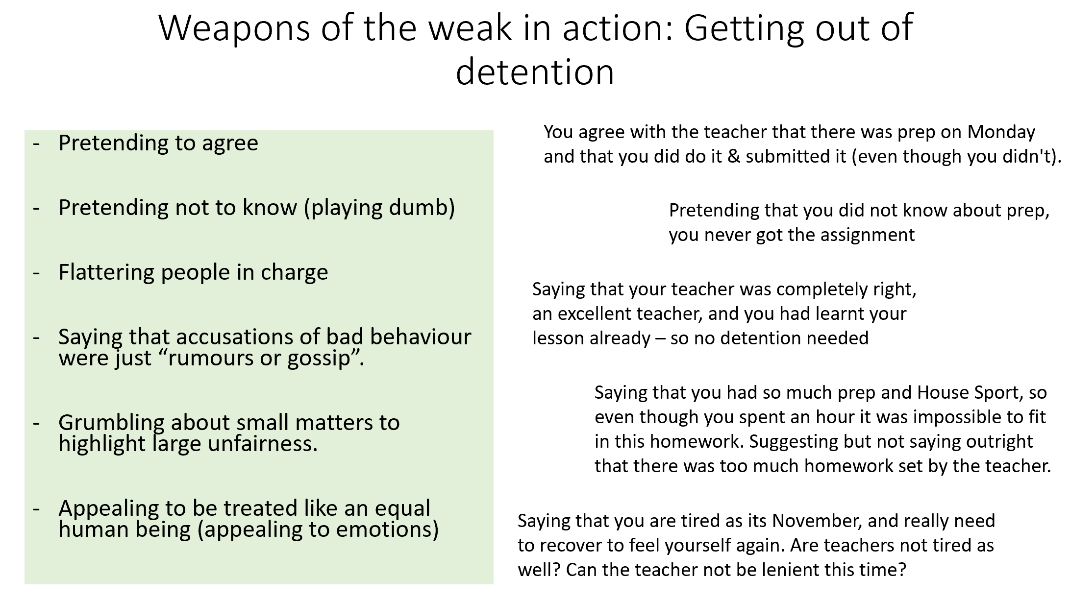 We then asked students to think about how careful they would have to be in demanding or using weapons of the weak if the punishment was not detention but exile or worse, death!

We gave students two of Jind Kaur’s existing three letters written while she was imprisoned by the British. We asked them to write down the weapons of the weak in the corner and then modelled how we could use these weapons of the weak to find resistance to British control and oppression in her letters. 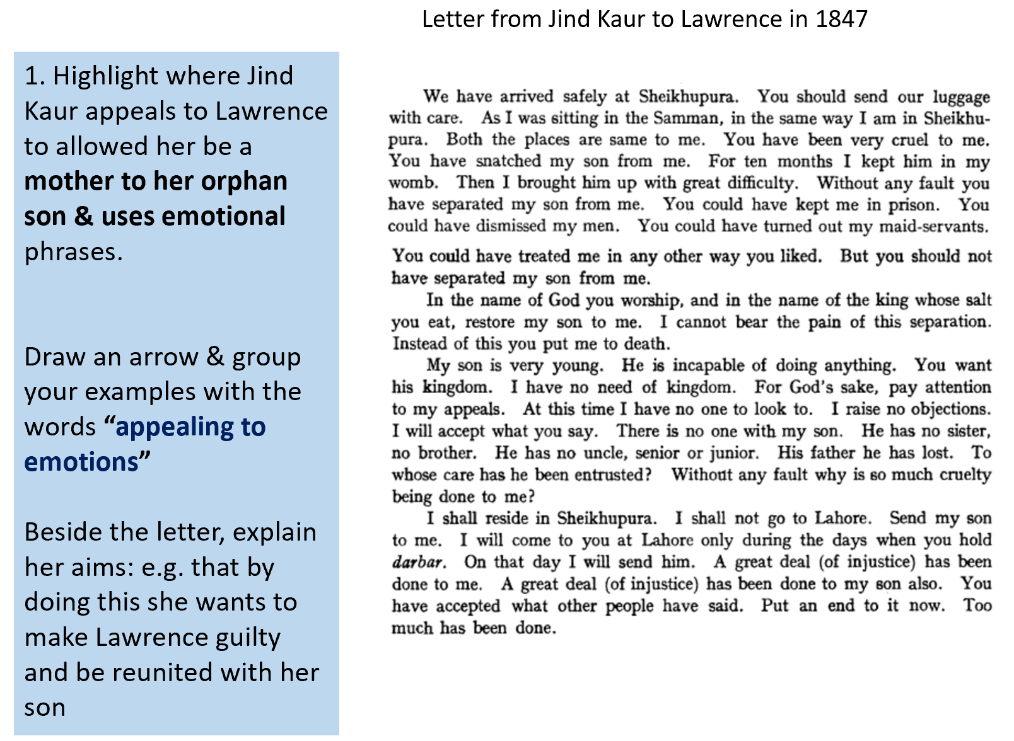 After modelling the first one with clear instructions and putting them into pairs , the class were left to try to find the weapons of the weak using the list as a guide.

The results were tremendous and amazed both teachers who taught the sequence. There was no generic comment or boring analysis. The students were self-motivated and propelled to engage with tricky resistance readings of post-colonial sources. They were able to pick out flattery, emotion, playing ignorance, grumbling about small things (luggage) to protest about larger things (that she should be treated like a Queen no matter where she was placed by the British). They also were self-motivated to go onto analysing letter two for Weapons of the Weak.

This was a technique that revealed that young people can engage with source analysis to a high degree if there is both:

1) An interesting and self-motivating narrative or question;

2) They have sufficient contextual knowledge and tools to read sources critically.

Where do we go from here and questions it raises:

We finished the enquiry looking at how Jind Kaur’s letters were smuggled out of prison and published in newspapers to expose British lies about their take-over. This formed another example of how resistance could be uncovered with deep historical context.

At the end of the sequence, we revealed how her resistance ended with her death (but did not die…), and how her story was silenced in subsequent British history about colonial power in India. We discussed how students learning her story and uncovering her resistance allowed them to be active participants in uncovering colonial voices from all perspectives.

We are moving next to undertake a depth study of Benin; the British (& European) triangular slave trade, and enslaved people’s resistance in the Caribbean. Looking ahead, we are going to investigate more on how historians have uncovered female voices from testimonies of British enslavers and abolitionists. We hope that we will be able to introduce more resistance readings techniques – reading against the grain –to continue creating Year 9 students who are both critically active and engaged at source analysis.

However, it does raise the tricky question: How do we maintain this enthusiasm for resistance reading when we get to GCSE stems such as “What is the main message….; How useful is….” etc.